In this update, the new paid Hero [Qian Sui] is now available, and the Reincarnation –Level 8, 4 new weapons and 25 new scrolls, and new monster enhancements are added to the game. Besides, there is a balance adjustment for some Ascensions and Spiritual Blessings. We also optimized the in-game sound effect, UI, and game system, and fixed some bugs.

If you have any problems or suggestions during the game, you could use the in-game feedback function to let us know. Your support is essential for us to keep polishing the game. Have fun in Gunfire Reborn! 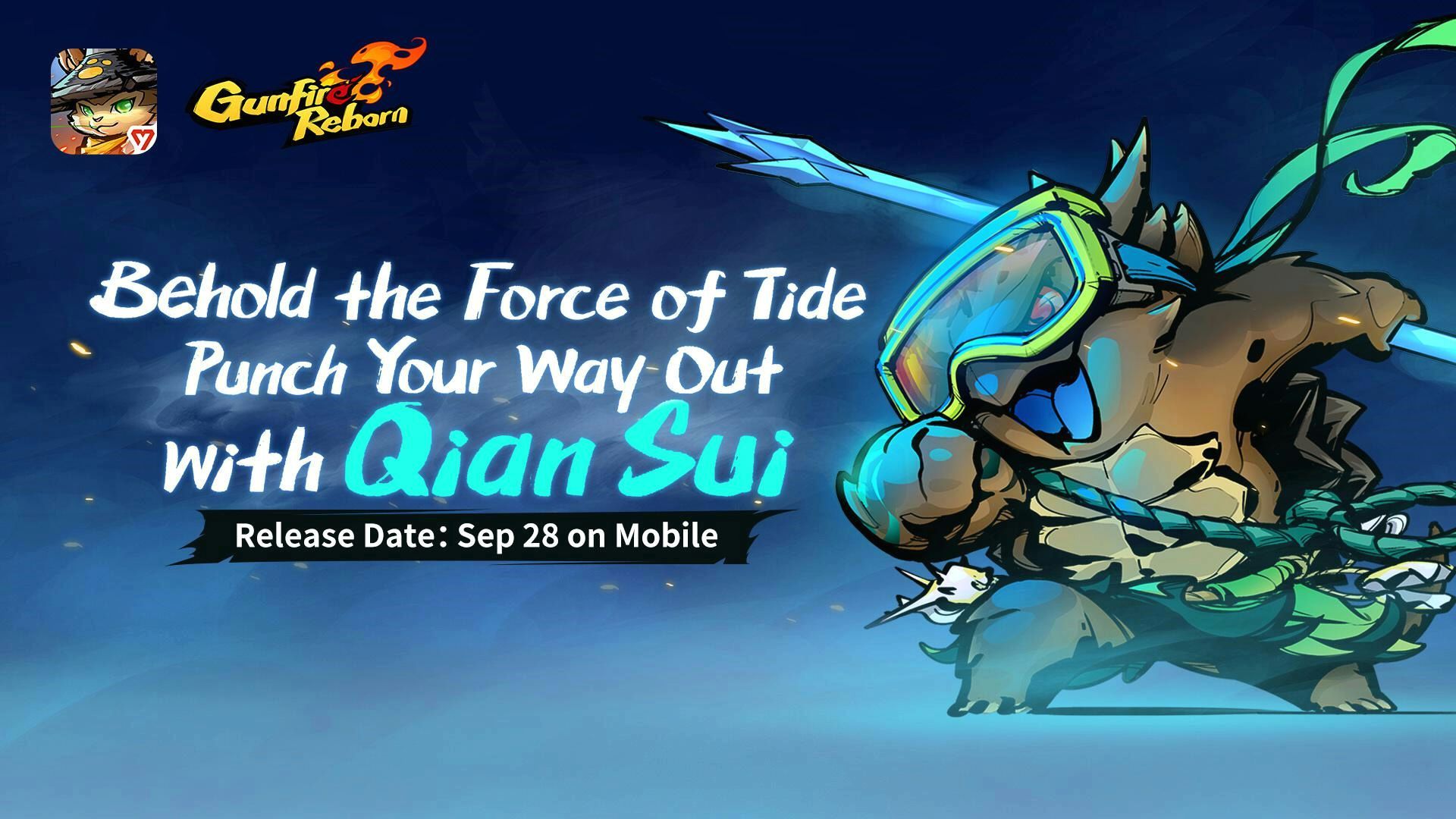 Introduction：
The valiant Qian Sui specializes in the art of close combat, traversing the battlefield while showing off his immense strength. Being associated with water, Qian Sui is capable of summoning a Tidal Aspis to block his enemies' fierce attacks while smashing any enemy daring to stand in his way.

Skills:
Primary Skill – [Tidal Aspis]
Summon a Tidal Aspis to block all attacks from frontal enemies for 5 seconds. When you recast this skill or when this skill expires, the Aspis will be retracted, dealing AoE DMG to enemies in front. When holding the Aspis, shooting becomes [Striking Punch], and [Dash] is enhanced to [Hurtle], which doubles movement distance and knocks back enemies on his way, dealing 700 normal DMG in the end.

Exclusive Talents:
(1) Swelling Tide: When retracting the Aspis, for every 1s of its remaining duration, -10% cooldown of Tidal Aspis.
(2) Agile Titan: +20 Max Shield. Grants +10% total Movement Speed for 6s upon using any hero skill or dashing.
(3) Unceasing Flow: Holding the Aspis will restore 1 use of Striking Punch every 2s.
(4) Unshielded Force: The Aspis's retracting attack will also trigger all the effects of Striking Punch.
(5) Wild Punch: +30% [Hurtle] Base DMG for every level-up for the weapon you currently hold.

New Spirit Blessings：
[Life Power]
+2% Weapon DMG for every 1 HP recovered (up to Max HP), but -2% Weapon DMG for every 1 HP lost. The bonus starts at 0%, but will not fall below this.
[Elemental Orb]
Dealing Weapon DMG will create an Elemental Orb (CD: 3s). The type of elemental orb changes when reloading. -0.1s CD for Elemental Orb and +5% Elemental DMG for 10s when defeating a normal enemy affected by an Elemental Effect, or inflicting an Elemental Effect on an Elite/Boss monster. (up to 25 stacks).
[Double Tap]
Upon hitting an enemy with a weapon, deal DMG based on the weapon’s base DMG and projectile count, including all bonuses applied to the triggering hit. (CD: 0.5s)
[Gradual Improvement]
Gain 1 stack of Gradual Improvement when a shot lands a Crit Hit, but lose 1 stack when a shot lands only Non-Crit Hits. +0.3x CritX for each stack (up to 30 stacks).

Weapons
New Weapons
[Hell]
Unlock：Kill [Horsehead] 5 times with Non-explosion DMG.
Type: Shotgun
Intro: Piercing +2; Reload the ammo one by one and can shoot at any time when there is a bullet in the magazine

[Strike Wing]
Unlock：Kill [Octopus] 10 times
Type: Sniper
Intro: After hitting an enemy, 3 additional arrows will be launched at other enemies behind the initial target.

New Exclusive Inscriptions:
(1) Strike Wing: A split arrow leaves a mark upon hitting an enemy. +100% Lucky Shot Chance of the split arrow if it is generated through hitting a marked enemy.
(2) Argus: Generate a spirit upon your first hit on an enemy. The spirit will deal DMG to the enemies in a line when you hit a random enemy.
(3) Scorching Rounds: Explosion AoE +3m, and explosions generated by hitting a block share explosion bonus.
(4) Demonlore: +50% magazine capacity, and reloading grants stacks of Weapon Base DMG bonus. The number of stacks is equal to the magazine capacity. Lose one bonus stack for every shot you fire.
(5) Frenzied Shark: Grenade does not detonate over time, but detonates when there is an enemy within the blast radius.
(6) Prism: Split 3 darts after the first ricochet.
(7) Rainbow: The farther the mark is, the higher the ray DMG toward the locked mark.

Inscription Adjustments：
(Gemini) Plant a spore on the target when hitting enemy and deal extra damage when the spore from different weapons meet together. (Stacks will not be reset after encounter) →
(Gemini) Plant spores on hit. The amount of spores is equivalent to on-hit Projectiles and Projectiles of the other weapon. When the amount reaches 30, deals additional Weapon DMG to the target.

Inscription Remove
(Gemini) Killing an enemy with the held weapon increases base DMG of the next shot from the off-hand weapon by +50%. (Up to 6 shots, stackable)

[Against the Flow]
Unlock: Default
Quality: Normal
Intro: Hitting an enemy will apply the effect for 4s, refilling 15% (rounded up, minimum 1) of your magazine per second. When the effect ends, you instead lose 1 random type ammo from reserves per second.

[Untold Effort]
Unlock: Default
Quality: Rare
Intro: When using the Secondary Skill, there is 50% chance to double the consumption and 50% chance to deal double DMG.

[Hidden Transaction]
Unlock: Default
Quality: Rare
Intro: There's a 33% chance to enhance a weapon by +1 extra level when enhancing your weapons at a craftsman.

[Extravagant Consumption]
Unlock: Default
Quality: Legend
Intro: +1% All DMG for every 100 copper spent. If you bring over 500 coppers to the next stage, then the excessive part will be consumed.

[Broken Gun]
Unlock: Default
Quality: Cursed
Intro: 15% chance to cause only 1 DMG upon hitting an enemy

[Heavy Burden]
Unlock: Default
Quality: Cursed
Intro: The higher the Max HP and Max shield/armor are, the lower the movement speed is. (Decrease up to 20%)

[Cautious Shot]
Unlock: Default
Quality: Cursed
Intro: Every missing shot causes 1 DMG to yourself. This effect will not knock you down.